Some fun things happened this week; thought I’d share tonight. Just going to go down the list and share any photos that correspond. Most of this revolves around the fact that we received new chicks yesterday. Here we go… 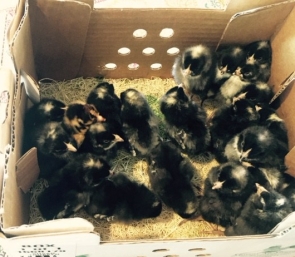 Sue ordered Barred Rocks for this fall. Looking for heat hearty birds that were good layers. We wanted to get them now so that they’d be ready to lay come spring. They were due to arrive yesterday, so Monday night we moved the Banty babies into the green house with Maeve and Baby. Maeve and Baby didn’t really like the intrusion, so they were booted out into general population. They seem to have bonded quiet nicely and are never far from each other. The Banty chicks are still getting used to the big wide world and haven’t ventured out into their enclosure. 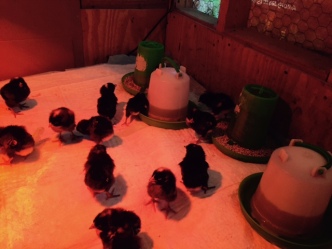 Tuesday Sue cleaned out the brooders really well in anticipation of the the newest littles. They arrived just when she expected Wednesday morning. Everyone seems hale and hearty. Still can’t get over the fact that they survive in a little box in the post. (see photo above) They do though and Sue soon had them running around their new home for the next 6 or so weeks. All chicks, old and new, are adjusting quite well to their respective new homes.

Once Sue had everyone situated and was able to take a look a the mailing label, she had a surprise. The chicks she received were actually Cuckoo Marans. This is what the hatchery has to say about them:

Cuckoo Marans were developed in France in the mid 1800s in the town of the same name, Marans, France. The breed made their way to England in the early 1900s and quickly became very popular for their rich, dark brown eggs (at left) — a trait they are still known for today. These beautiful birds were first exhibited in 1929 in Paris by the Poultry Breeders Society of France, and since then have become popular around the world. The Cuckoo

variety of Marans resembles the Plymouth Barred Rock — with its dark feathers barred with irregular dark and light slate colored bars. Unlike the French Black Copper Marans which has lightly feathered legs, the Cuckoo Marans has clean, pinkish white legs. Cuckoo Marans lay the some of the darkest eggs of any breed we carry, and are a nice dual-purpose bird for both eggs and meat. This is a good, hardy breed which is good in a free range setting.

So – that was exciting to learn. It’s great that they do well in a free range setting. We’re going to need to repopulate the RCW with some chickens that will stand up well to the moving pasture life. It’ll be interesting to see how well they do. 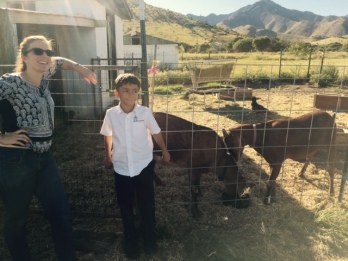 Today we had a fun visit from our friends Nate and Nicole. (Nicole is our friend who graciously let us store some chickens in her freezer until they could find their forever homes.) They were kind enough to give me a ride home from work and then got the tour. Nate had fun getting to hold a baby chick, run up and down the rock mountain, feed the goats some sweet treats and pick some pomegranates to take home. Not sure how much fun Nicole had tromping all over the acreage in her nice work shoes, but hey – that’s what happens,

sometimes, on the farm. She did like the views 🙂 . Maybe they’ll come back and do other stuff with us another time. We spent a bit of time checking out the gabion gardens and talking herbs and veggies. Their soil in town is horrible and she’s been having difficulty getting things to grow in her garden… so she’s trying to see what works well in containers, rather than planting directly in the ground. They were troopers allowing us to take photos and talk about their visit today.

You know, we’re always saying you should come visit… look what happens when you do, there’s always some type of take-away. Could be eggs, could be zucchini, could be pomegranates. You’ll just have to come and see what it is for the day you visit! Until then, as always~
Thanks for reading!