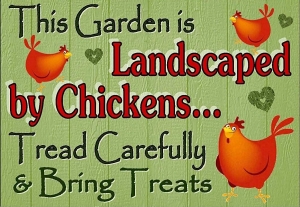 Yep. Here I am on Super Bowl Sunday, watching the game and blogging, because – you know, there are so many replays and chatter that you can totally keep up and still do something else. Besides, I can always  stop typing to watch the commercials. It’s almost halftime, so we’ll need to pause live TV to go put the chicken’s in in just  a few minutes. No matter what is happening between the Chiefs and the 49ers (Go Chiefs – for Holly and Family), I really just want to talk about gardening and what we did yesterday. 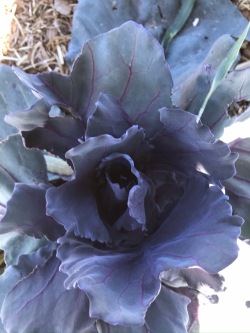 Usually, this time of year, I talk a great deal about seed catalogs because i love them and I like looking at all the new stuff… but this time, I’m not  – mostly because we have so many seeds left over from last year that I need to try to use up, but also because we’ve been picking up seedlings – Instant progress is wonderful. Although, I must say that our winter planted veggies are doing really quite well. This photo is of our purple cabbage, nice! Today I’m just going to go down the line on what we were able to accomplish yesterday. Let’s go.

So, we started our work day (which doesn’t include chores, because those have to happen every day), we moved wood pallets into the main coop run area. Sue wants to do a compost area in the coop to encourage the bugs there, help cover up the bard dirt and give the chickens something different to during the day. That was easy.  The next task was to move some hay bales over to the dinky house yard. We’ll grow the meat birds over there again because it’s a nice cool spot during the summer, but the hay bales are good for keeping the little tractor from blowing away. So we loaded three bales into the back of her truck and drove them around, dumped them out and had the Vicente and his two hens hot foot it down from the goat pen to see what they could get from the new fun things. One final move of just one bale into Flattop’s run to replace one that they had totally decimated.

Break for breakfast. (We had spinach and scrambled eggs. In case you were wondering.)

Next we dug out a maple tree, that was actually in a pot, but had completely rooted into the ground. Sue had a hole ready where we removed our largest Chinese elm that had died a year or so ago. She also made a great wire basked to protect it from the gophers. We got the maple settled in and watered down quite nicely. Put some hay around its base to keep it moist. Forgot to take a photo.

Took a break to go to Harbor Freight and Ace hardware. Picked up some tools we needed to replace, a few supplied and – of course, some seedlings to plant and a Texas Ranger bush. No it doesn’t grow Chuck Norris look-a-likes, but is one our very favorite landscaping bushes out here. 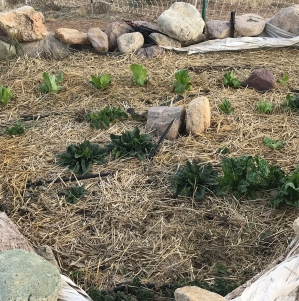 After chores, decided it would be best if I got the seedlings in the ground. We had picked up Sugar Snap Peas, Pak Choi (called Joi Choir – cute), Asian Greens (who knows, but the chickens will love them), a leafy lettuce called Ice Burg – not the Iceberg you’re thinking of though, some Romaine for me, and cauliflower for Sue. Not bad. I added the romaine and the ice burg in the quadrant that already has some 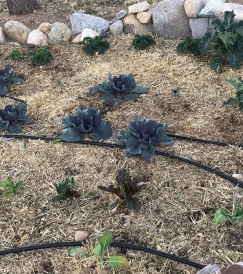 spinach, red collards, and Swiss chard. The cauliflower went into the quadrant with the broccoli, kale, and purple cabbage. So the peas and the Pak Choir started a new quadrant, never before planted. That leaves me 3/4 of that one and a full empty quadrant (is that an oxymoron?). I used the old pea fence to put around the those surgar snaps and topped it with part of an old fence and stuck the scare crow to the side, all in an attempt to give the peas a fighting chance against the doves. They can be as bad as the gophers with new 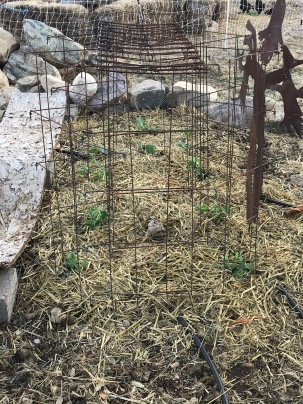 little plants. Here’s the visual so you can see what I’m talking about. Now, in the 1 and 3/4 quadrants remaining, I’ll plant tomatoes, egg plant and squashes for the summer. See if we actually get any tomatoes this year.  Oh, last week I stuck out some artichoke plants in the area that I’m starting to think of as “the Mediterranean garden”. One plant was immediately, well within 24 hours, eaten by those dang gophers! grrrr. Need to find some of those traps mom used to use in the garden when I was kid. Anyway, that’s it for new plants right now… ok, ok. We rescues two mums from Ace, they were a buck. Planted them in the wheelbarrow flower garden I keep out front. 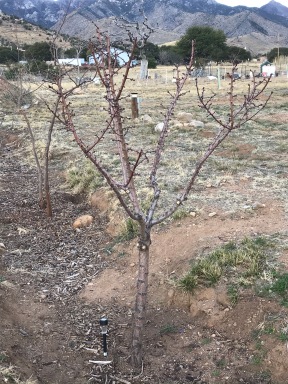 Pruning. Pruned the almond tree. Looks very nice now. It was rather chaotic and I swear was ready to burst out in flowers, so I had to get it done pronto.  I saved some of  the straighter branches that I had to cut off to see if I can force the blooms in the house. It may be too dark inside, but  if it works, it will be so pretty. I have a close up photo of the little buds just waiting to pop. It’s a little dark, but I’ll share it. The branches were all covered with little buds, just 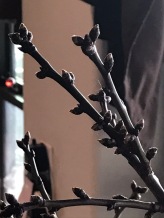 like this. If they bloom, I’ll definitely share a  photo on Facebook. Anyway- while the pruners were available, decided to do all the roses. Since I was out doing the climbers on the front fence, thought – might as well plant Sue’s bulbs. So now either side of our gate are little “Star of Holland” and “Apple Tulip Mix” bulbs. They’ve been in the cold fridge for a bit, so I’m hoping they’ll pop this spring – especially if we get a bit of rain again. It’ll look pretty in the spring if we just keep adding bulbs out there. I need to thin out the narcissus and daffodils from the St. Francis garden and I’ll move them out front – same with the bulbs in the gabion gardens as well. Plans, plans, plans. We also walked the property looking at places to plant our remaining trees. Sue made a sketch so we can remember exactly what we talked about. We do this often, but forget a couple of days later. Now we’ve got a plan. Yay! (Oh, and Yay, Chiefs! Great game.)

That’s it for now. We have a very busy week ahead of us, going into Western Heritage Weekend, which will be a busy Sunday for Sue. If I don’t post anything, don’t worry about us, we’re fine (Dad).  Sometimes we just don’t have much farm activity to report – and who wants to read the same ol’, same ol’? If something juicy happens, we will share it at some point. Until then, as always~
Thanks for reading!

Today’s Weather: Was absolutely beautiful today, until the wind started. I think we’ll be having wind for a couple of days as a storm goes through to our west. Today’s high was about 69°. Currently, at 8:23 p.m. it is 55°, clear, and windy. Sunrise was at 7:12 today, and sunset at 5:57. Chickens refuse to go in before 6pm now.

Egg Report: As the days slowly get longer, our egg count slowly rises. Last week, a good day was 16 chicken eggs.  Today we ended up with a total of 28 chicken (5 of those were little Banty eggs), and 2 duck. Goose still lays periodically, but it is rather raandom.